Al-Muzahmiya Governorate is a province west of the city of Riyadh on the Riyadh-Taif road, it is 40 km away from the city of Riyadh. It is bordered to the north by Dhurma Province and from the south Al-H̨arīq Province and Al Rhine Province, from the east Riyadh city and the palaces of Al-Muqbel and Al-Kharj province and from the west Quwayiyah Province. It lies in a wide valley known as Wadi Al-Batin, and was founded in the 16th century as a colony of small independent farms and estates that later joined together to form one village. It is currently part of Al-Muzahmiyya Governorate. It's considered the west gate of the capital city of Saudi Arabia Riyadh. Al-Muzahmiya Governorate considered the western gateway of Saudi capital Riyadh. It has an area of ​​10,000 square kilometers with a population of 39,865,000. Its population is one of the fastest-growing towns in Riyadh Province, Saudi Arabia.

Al-Muzahmiyya has become number 1 destination for Riyadh residents due to its convenient location and its great attractions especially during winter season. The city is famous with its nature which combines golden sand dunes which are some of the world&rsquo;s great natural wonders in one side and the other side of the city is surrounded by mountains.

Local Food and Restaurants in Al-Muzahimiyah

Local Food and Restaurants in Al-Muzahimiyah

The climate of the province of Al-Muzahimiyah is dry in summer and cold winter.

About Hotels in Al Muzahimiyah

Al Muzahimiyah provides a huge range of Hotels to stay for all kinds of travelers. You will find here from cheap, budget lodges to the most luxurious hotels. The best luxurious hotels around the world like Le Meridien, Sofitel and Radisson can be found here. There are various budget hotels which are located to conveniently reach the attractions in and around Al Muzahimiyah. These are ideal for the budget travellers. 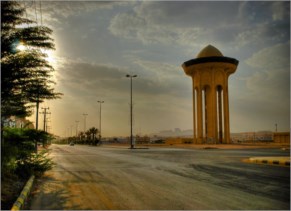