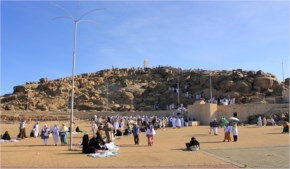 Mount Arafat is also known as Arafah Mountain, Al Rahma, Al Nabet, and Al Al Mount. It is one of the most important mounts for Muslims because it is a part of religious duty of Hajj, as Prophet Muhammad -PBUH- said, “The Hajj is Arafat,” meaning standing at Mount Arafat on the 9th day of Dhul-Hijjah is a fundamental pillar of Hajj pillars without it Hajj can’t be fulfilled, that why it is of great significance.
Mount Arafat is located 20 km between Mecca and Al Taif, 10 km far from Mina, and 6 km from Muzdalifah. It is marked with two flags referring to its start and two other flags referring to its end for those who are strangers from the area. Valley of Urana is between the flags, about which Prophet Muhammad -PBUH- said,;Arafat is a station except the Valley of Urana Mount Arafat has several characteristics distinguish it from other mounts on earth like it is a large arena with 2 miles long vertically and 2 miles long horizontally. it is surrounded by series of mountains taking the shape of a big bow. From the Holy Haram side, it is bounded by Namera, Thaweyah, Dhi Al Majaz, and Al Arac. Under the mountain in the right side, there is a mosque called Al Sakhrat Mosque; it is called so because Prophet Muhammad -PBUH- stood at big rocks on Arafah Day riding his camel Al Qaswa
Discover Mount Arafat