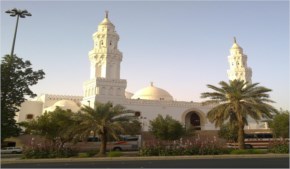 Masjid - Al Qiblatain located in Bani Salamah district in the north-west road to Medina on Khalid Bin Al Waleed Road and its intersection with Al Malka Street (commercial center in the city of Medina). It is very close to the Second Ring (King Abdullah Road) to the west. The Mosque with an area of 3920 square meters.  It is one of the oldest Mosques in the world, and uniquely contains thus two mihrabs - one in the direction of bait al-Maqdis (Jerusalem), and the other towards Makkah, One was facing Mecca and the older one faced towards Jerusalem. Lately this masjid was amended and the old mihrab had been removed which was directed towards Jerusalem. Now the masjid has only one mihrab which is facing towards Mecca. Masjid - Al Qiblatain characterized by its Brilliant white colour which makes it a special elegance and beautiful scenic. Masjid al-Qiblatain was originally built by Bani Salamah, who were of the Al-Khazraj tribe on a small hill near Wadi al-Aqeeq. Over time, the design and structure of the masjid changed greatly. It is now triangular shaped. Caliph Omar bin Abdul Aziz has renewed the mosque, and then renewed Alshgae Shaheen Al Gamali in 893 AH, and then renewed by Sulaiman Al Sultan Al Othmani in 950 after Hijra. The name of the mosque goes back to the beginning of Islam when the companions of Muhammad named it after an event that took place. Muhammad was leading the prayer when he received a revelation from Allah instructing him to take the Kaaba as the Qiblah. Qiblatain mosque can accommodate up to 2000 worshippers.
Discover Masjid al-Qiblatayn