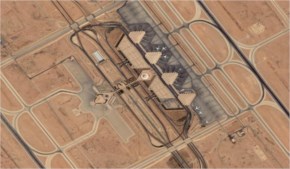 King Khalid International Airport is located 35 kilometers north of Riyadh, Saudi Arabia on an area of ​​225 km2, putting it on the world’s largest airports list, it was the largest airport in terms of area when it was established in 1404 AH (1983 AD). King Khaled Airport is one of the famous landmarks in Riyadh, it is considered the air crossing to and from Riyadh, in addition to being the center of national air transportation system. King Khalid Airport was designed by the American firm Hellmuth, Obata Kassabaum following the Islamic style and to be compatible with the desert nature of Riyadh city. This airport was constructed to meet the increasing international and local air transport requirements for Riyadh.     The Airport contains several supporting buildings like the central management complex, the public safety complex, three fire stations, catering and central kitchen building, maintenance workshops for the ground equipment, facilities maintenance complex, and the internal residential complex in addition to the building of communications meteorology center.   This airport consists of 4 passenger terminals, a Royal Terminal, air freight, postal building in addition to private aviation building, mosque, a central control tower and two parallel runways, which are each 4,200 meters long and 60 meters wide, three parallel tracks and two tracks connecting the two runways, each is 1800 meters long. There are also four squares to serve the airport and plans parking in addition to subways. The terminals are connected to each other by means of four linking buildings, These buildings are 168 metres long and have area of 25,000 square meters each. The complex includes a modern VIPs terminal plus restaurants, cafeterias, airlines offices, government departments, hotels and rent-a-car companies counters, banks, first aid clinics and commercial shops.There are also covered and uncovered car parking that can host 11,600 vehicles.
Discover King Khaled International Airport