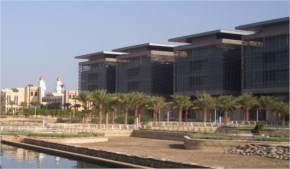 King Abdulaziz University located at Abdullah Sulaiman Street, Jeddah. It considered to be as the fourth largest university in the Middle East, the university becomes one of the outstanding higher education institutions on the local and international level. This university offers educational programs for preparing the graduates to do jobs that cope with the changing needs of the community. This university offers educational programs for preparing the graduates to do jobs that cope with the changing needs of the community. The university was established in 1387 as a national university and after the resolution of the Council of Ministers was issued in 1391 H including the university in the government, the national university was changed into a government university and another decision was issued at the same time by including the College of Shareah and the College of Higher Education that were already established in 1369 H in Makkah in King Abdulaziz University. These two colleges followed Umm AL-Qura University after it was established. The university started its first year in 1388 H by inaugurating the preparation study program with a few number of students( 68 male students and 30 female students,) and directly the year after, the university inaugurated its first college ( the College of Economics and Management,) then in the following year the college of Arts and Human Sciences was established. Faculty of Economics and Administrative in this university includes these departments: Department of Business Administration, Department of Finance, Department of Marketing, Department of Human Resource Management, Department of Accounting, Department of Management Information Systems, Department of Political Science, Department of Health Administration, Department of Public Administration, Department of Economics. The university aiming at spreading higher education in the western area of Saudi Arabia. King Abdulaziz University includes two separate campuses according to Islamic regulations one for males and another for females. Each of these campuses is provided with all cultural, recreational and athletic facilities, in addition to a big library equipped the most up to date technology to serve students and the teaching staff. It is considered to be one of the distinguished universities in terms of the number of students, the number of scientific and theoretical fields of study and the exclusiveness of certain specializations such as Seas Sciences, Geology, Nuclear Engineering, Medical Engineering, Meteorology and Aviation and Mineralization. The University not only has the regular students program but it also has the external program to make it easy for all students to get higher education. It also established the Deanship of Distance Teaching to cope with the development in learning and teaching technology.
Discover King Abdulaziz University