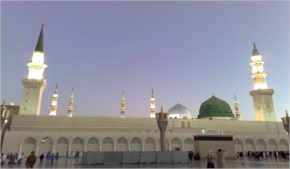 Medina is considered as the second and most holiest place in the Islamic World; it contains The Prophetic Mosque and hosted prophet Muhammad (PBUH); besides, it has his grave.  Its important location overlooks major regional roads such as Immigration Road, Yanbu Road, Al Qassim Road, and Tabuk Road. It has an official population of approximately 839.000. It has several names like: Yathreb; in pre-Islamic era name, Dar Al Hijra, and Taibah.
Discover Madina