Antiquity of the Northern Borders State

The Northern Borders State contains plenty of historical and cultural landmarks and tourism sites which are considered the most attracting areas for tourists to visit the Kingdom of Saudi Arabia, for instance,
Northern Borders Museum: It highlights the cultural and historical dimension of Northern Borders, besides spreading awareness among the people. It aims to preserve and document the antiquities and heritage of the province. The museum follows the Saudi Commission for Tourism & Antiquities (SCTA). It was opened for public in 1428 AH, corresponding to 2007 CE. The museum includes the following: Museum display halls, administration, and warehouses.
Museum Display Halls include Antiquities, Natural History, and Geology of the Kingdom Hall: it includes geological depiction of the Northern Borders Province, its habitats, the most important components as well as the most important archaeological sites discovered and a selection of artifacts from these sites. Prehistoric Pavilion: Talks about the human life in prehistoric times, and its industries, and stone tools, and the most important archeological sites in the Northern Border area, in addition to the period before Islam with the presentation of ancient rock inscriptions and carvings. Islamic Pavilion: It includes the stages of the beginning of Islam, which began with the mission of Prophet Mohammed - peace be upon him - and the expansion of Islam and the spread of Islamic conquests. It also presents the main stations on the Zubaida Hajj Road located within the Northern Borders province. The display includes some antique collectibles. Saudi State Hall: This hall shows the unification journey, the story of the stability and security and the expansion of the Saudi State I and the Saudi State II until the latest stages of the Unification of the Kingdom and the Saudi Arabia by King Abdul Aziz (may Allah have mercy on him). There are some documents, photographs and a variety of archaeological objects. Education Hall: It tells about the process of formal education and early schools in the area, as well as a range of old books, documents, photographs of schools and activities, old teaching and learning methods and tools etc. Heritage and Folklore Hall: It displays local folklore including clothing for men and women, accessories, weapons, cooking tools, lighting tools and local products made of palm trees fronds.
Al-Obaid Museum: It consists of three halls involving a collection of heritage pieces displayed inside the glass cabinets. Some exhibits, especially the big and heavy ones are displayed directly on the floor, while others are hung on walls. Among the most significant exhibits in the museum is a collection of valuable and heritage books, as well as a set of war tools like swords, guns and daggers, and women’s jewelry. In addition, there are household utensils that were used in the past, some gems and coins, as well as a range of audio and music devices, some beads, pendants, lanterns, incense burners, inkpots, scales, jars and seals.
Al-Jawharah Heritage Museum: The museum consists of two rooms, a reception hall and guests rest area. The main hall displays textiles, currencies, old newspapers, maps and cooking utensils.
The second hall displays Arab hospitality lounge, Arabic coffee tools, wool crafts and the stone formations. Reception hall displays some heritage tools also. Guest rest room is furnished with pieces of traditional old carpet and many cushions and back rests. The museum has special visiting times for women and female employees.

Dawqara Palace: It is an antique site located 40 kilometers in the west of Tarif Province subordinate to the Northern Borders State. The site dates to the late Roman period or the early Islamic era. Some researchers think that the buildings remains in Dawqara dates to the Umayyad age.
Zubaida Road: It is considered one of the most important remains indicating the significance of the Northern Borders geographical location. It is attributed to the Abbasid Caliph Harun Al Rashid wife Zubaida, daughter of Ja’far the eldest, son of Abu Ja’far Al Mansur due to her concern in digging the ponds and canals as well as building dams on Al Hajj Road heading to Iraq and Khurasan towards Mecca City. Also, she built fortresses, castles, and everything related to secure pilgrims from Kufa, Iraq to the holy sites. The road was well-known before Islam (Mecca Al Hira Road) and paid special attention to by the Abbasid Caliphs; the Abbasid Caliph Abu Al Abbas Al Saffah ordered to put signs for miles on the road and to set fire at night for guiding pilgrims. In time of Abu Ja’far Al Mansur, castles  and water tanks were built at points of the road. In the time of Caliph Al Mahdi, the road saw an expansion of all constructed buildings as well as flourishing in the time of Harun Al Rashid where ditches and valleys and roughness of the roads were removed. Mrs. Zubaida made glorious deeds for this road; she ordered to provide water, building tanks, containers, digging wells, and establishing many buildings and castles as well as ponds and rest areas. Khalisa, the servant of the Caliph Harun Al Rashid mother Al Khaizaran, joint her in fulfilling this task.
There are many special houses in Zubaida Road situating on Rafhaa’ Province borders starting from Al Dhufairi Well in the north to Al Ashar Well in the south as the following (Al Dhufairi Well, Al Amyaa’ Well (Al Jalhaa’) Al Qaa’ Well, Al Thulaimaa’ Well, Al Jumaimaa’ Well (Al Juraisi), Zubala Well, Al Shahouf Well (Al Radm), Al Asafeer Well, Al Shehiyat Well (Al Shoqouq), Khunaifis Al Shamail and Al Janoubi Well, Al Hamraa’ Well (Al Rostomia), Hamad Well, and Al Ashar Well (Al Batan)).

Provinces of the Northern Borders State and its centers

In and around Northern Borders 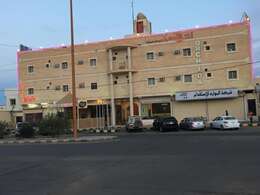