Najran State contains plenty of historical and cultural landmarks and tourism sites which are considered the most attracting areas for tourists to visit the Kingdom of Saudi Arabia, for instance,
The ancient city of Okhdood (Groove): this site is one of the most important monuments and historical sites in Saudi Arabia. It is a castle built of stones and surrounded by a 235-meter long wall that features a gate on its west side. The City of Okhdood is among the richest ancient sites in the Arabian Peninsula and the most important cultural tourism and historical landmark in Najran, due to the presence of carvings and inscriptions on the stone faces that date back more than 1,750 years ago..
Najran Museum: The Najran Museum highlights the civilization and historical aspects of the Najran Province in general, and the Al-Ukhdood archeological site, in particular. It is aimed at raising community awareness about the history of this area, and it is affiliated with the Saudi Commission for Tourism and Antiquities. The museum was built in 1403H (1983) near the Al-Ukhdood Archeological Site and opened for visitors in 1407 H (1987). It occupies an area of 482,232 square meters.
Al-Sunaij Museum: This museum consists of a hall that includes various collections of weapons, such as old rifles, daggers and spears; coffee and tea utensils, incense burners, copper cooking utensils and scales; saddles, old-fashion clothing, leather products, farming tools, and Sadu tents (the camel and sheep hair traditional Arabic tents) with their furnishings and other artifacts.

The Historical Palace of Principality: it is among the most famous traditional buildings in Najran. It is located in Abu Al Saud Center which is a unique architectural style built in 1961 by Turki Bin Madi, Prince of Najran at the time in order to be the place of principality of Najran. The palace consists of 60 rooms and one mosque. In the palace ground floor, there are rooms dedicated for the affairs of principality and the prince assembly and guests reception room. Meanwhile, the accommodation consists of 17 rooms and six stores. Also, there are a separate building as residence for deputy and Al Akhwiaa’ Building that consists of 12 rooms as well as an old well embedded with stones. In the upper floor, there are four circular tower for guarding and superintendence as well as a building for mails.
Al Qabil Villages: it is a village located in the north of Al Okhdood Site. It is distinctive for its traditional buildings that represent the architectural style of the region. Among the most important villages are Al Lijam and Al Meshkat Village which are one the villages locating in the north of King Abdullah Road and including many special houses built of clay. In addition to other antique village existed in the region.
Ro’om Castle: it is a historical castle located on the top of Ro’om Mountain which is located in the middle of Al Hudn Village in Najran City, near Prince Sultan Road. This castle of rock still standing in plain manner. There are ladders by which it can be approached. Also, those who are into climbing visit it.
Al Aan Palace: it is an antique palace called Sa’dan and located on Al Aan Mount. It was built in 1100 A.H. of clay on foundations of stones which the region is distinctive for. It is surrounded by a wall of clay and located in the west of Najran City with a view over it. It consists of 4 floors and still inhabited till now.
In addition to Al Manjam Antique Village, Al Sadran Palace, Badr Al Janoub Palace, Al Aan Antique Houses, and Al Makrami Historical Palace (Al Sa’dan).

Provinces of Najran State and its centers

In and around Najran 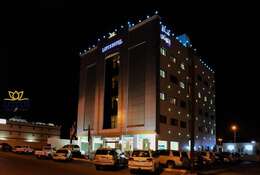