Show all 528 properties in Madina
Copy to clipboard 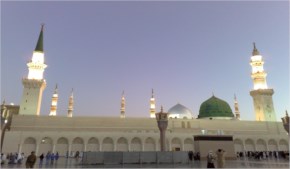 Al Madinah State is one of the administrative governorates in Kingdom of Saudi Arabia, which is also known as “Taiba” and “Dar Al Hijra.”
Al Madinah State is of an area of 150.000 square kilometers and has an official population of 1.777.933 people, with an estimated population density of 11.8 % of the total residents of Saudi Arabia.
Al Madinah State is famous for Al Masjid Al Nabawi and number of the important Islamic and historical landmarks such as Quba Mosque, the Two Qiblas Mosque, and Al Baqi, which are visited by more than 20 million travelers who come to perform rites of Hajj or Umra.
Read More

In and around Madina

Al Madinah State contains plenty of historical and religious landmarks and tourism locations which are considered the most attracting areas for tourists to visit the Kingdom of Saudi Arabia, for instance,
The Holy Mosque of Prophet Mohammed: it is located Any talk about the cultural movement and social, political and economic aspects in Al-Madinah must highlight the role of the Holy Mosque of Prophet Mohammed in the revitalization of those aspects. Since the Hijrah (Migration of Prophet Mohammed (peace be upon him) from Makkah to Madinah), the first thing to do was to build the mosque and his house adjacent to the mosque. Since that time even until the foundation of the Saudi state, the Prophet's Mosque is the life center for the residents of Madinah as a place for their activities, a place for prayer, a place for Daawah, education, Ifta, political agreements and consultation on battles.
Quba Mosque: it is the first ever mosque built in Islam. It is located in the south west of Al-Madinah city. When the Messenger of Allah, (peace be upon him), arrived to Quba, he stayed at Beni Amr Ibn Awf and established the first mosque there. Holy Prophet built it himself with his hands. Even after he left to Al-Madinah he used to visit Quba and pray in the mosque. This he did until his death. Then, his companions continued to do the same. The mosque had a well for Abi Ye’qob AL-Ansari. Expansions to the mosque have been made during the early Islamic periods.  The final expansion was on the latest architectural styles during the reign of King Fahd bin Abdul Aziz, (may Allah merciful to him).
Qiblatain Mosque (Two Qiblas): it is located in the north west of Al-Madinah city, on the hills of Harrat Al-Wabra near Aqiq, west of Sala mountain. When coming to Madina by Khalid bin Walid road, it will be on to your right side. Children of Sawad ibn Ghanam bin Kaab hae built this mosque in the time of Prophet Mohammed (peace be upon him). It is called  the Mosq of two Qiblas because Prophet Mohammed ordered the change in direction of Qiblah towards Kaabah instead of its existing Qibla facing Aqsa Mosque in Al-Quds.   While he was praying Dhuhr (noon) prayer in the mosque on 15th of Shaban, 2nd Year of Hijrah, corresponding to 624 AD he had done so. According to some sources, the shift of Qiblah was done during the Dhuhr prayer at the Prophet’s Holy Mosque, when a messenger from there was sent to the the Children of Sawad mosque telling them about the shift. They were praying in the second Rakaah, so they turned to the new Qiblah during their Prayer toward Kaabah. Hence this mosque was re-named since then as the Qiblatain (two Qiblas) Mosque..
Battle of Al-Khandaq Site: it is a mountain which is located in north east of Makkah. The mountain includes the Cave of Hira, where the Prophet Mohammad (peace be upon him), used to spend long periods worshiping before his mission. The mountain was named Noor which refers to the light of Dawah that emerges from it and lights the horizon. When climbing up to the cave, you can view parts of the Holy Mosque “Al-Masjid Al-Haram”.
Uhud Battle Site: it is located 4 km to the north of the Holy Mosque of Prophet Mohammed. The famous battle Uhud occurred on its grounds, between the Prophets and the Makkah infidels. 70 of Prophet’s companions (God bless them all), who were martyred there during the battle are buried led by Hamzah bin Abdul-Muttalib, the uncle of the Messenger of Allah (peace be upon him).
Al-Hijaz Railroad Line: it was established by the decision of the Ottoman Sultan. The line connects Damascus with Al-Madinah Al-Munawarah. It was established to facilitate the movement of pilgrims to Makkah.
This railway continued to be used for nine years from the date of completion. It had strengthened the business between the North and the South and stopped later due to the world wars. However, its stations remained as archeological ruins scattered in the Kingdom cities and regions.

Tabuk Station: This is one of the main stations along the Hijaz railroad. It is characterized for its distinctive style of construction. The arrival of the first train to the station was celebrated in 1906 A.D. Today it is located in the center of Tabuk city and consists of a group of buildings constructed in a straight line parallel to the railroad. It was renovated several times and it is in a good condition. It covers an area of approximately 80,000  square meters.
Al-Madina Museum (train station): Hijaz train station is located in Bab Al-Anbariya field in Al-Madinah. It has been converted to an Islamic Museum due to its significant historical and archaeological location, in addition its unique architectural style.
.
Madain Saleh Train Station: it is a large and major pilgrim station, this site contains an ancient Islamic fortress surrounding the Naqah Well. There is also an old pool and 5 stone wells, as well as 16 railway buildings built with treated stones.
The train station is near Mada’en Saleh and consists of 16 buildings that date back to the Ottoman Empire. It is one of the most important stations along the Hejaz railway. It is characterized for its architectural style, and was used as a rest area, accommodations and a restaurant for passengers. It consists of a workshop for the maintenance of trains. Parts of a train still remain at the station today.
There are a number of other stations no less important in Al-Madinah Province including Atheeb, Mubarak Al-Naqah, Abu Taqah, AL-Ola, Bwat, Al-Hafeerah, Mekheet, Al-Badae’, Hadiag and Al-Medrej.

Provinces of Al Madinah State and its centers